Alex "Lexi" Greenfield is a hypnosis enthusiast, interested in hypnotizing both herself and others around her. She is well-educated, having studied physics and chemistry in university and graduated with a double degree. While she remained mostly skeptical about the existence of magic until provided with proof, she slowly came around to accepting it and using it for her own personal interests, despite not having any magical ability.

Alex became hooked on self-bimbofication as stress relief from studying, midterms, and exams. With Seraphina's help, she strengthened her self-hypnosis with a sparklestone to help indulge her developing kink. With Brooke's help, she was hypnotized into bimbofying herself whenever she orgasmed, with the effect reverting over a few hours. Based on others' suggestions, she also had a spell put on herself to turn her physical form more bimbolike the more her mind transformed. This slightly backfired due to magical adaptation, making her body unable to revert from its bimbo form even when her mind was back to normal.

She eventually begins streaming on Flyck as Lexi.

I like how fake these tits look. It just seems more natural for a bimbo, ironically.
—Alex 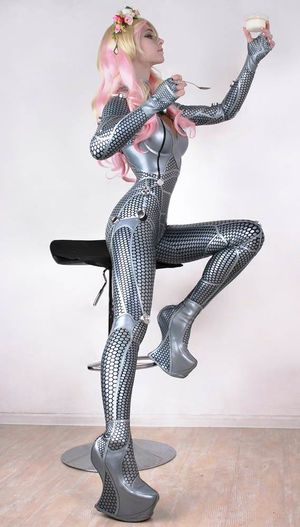 Sample concept of Lexi in a nanotex bodysuit.

Alex is of about average height and weight. She has brown eyes and short brown hair, with a hair clip to keep it from falling into her eyes. She has relatively small breasts, although she doesn't mind it much. She usually wears yoga pants with a white tank top.

Once she had a spell cast on her to have her body change based on the state of her self-bimbofication, Alex got another appearance. When fully bimbofied, her hair turned into a slightly longer, wavy blonde colour, with pink highlights. Despite not having a problem with her breasts, she grew them to a much larger double-D size, making sure that they looked fake, since she found that it suits a bimbo more. Her eyes turned into a light blue colour, and she grew longer, painted and shiny fingernails. Her ass grew rounder to match her figure, as well. Alex calls this her "Lexi" body and mind.

As a test, Alex wanted to go get a tattoo as Lexi. Initially opting for something small, her bimbofied mind decided to get a full tramp stamp with "Lewd Lexi" [Undecided!] across her lower back. As she sobered up, she realized what kind of mistake she made, but calmed down once she saw that the tattoo disappeared as her body went back to normal.

Each time Alex bimbofied herself, a bit more of Lexi stayed on her (slightly blonde hair, bigger boobs and butt), although she didn't notice. She got a few bell permapiercings as Lexi, loving their feeling and that she didn't have to deal with them as Alex. After a few more sessions, Alex got drunk with her friends on fuckpotion and turned into Lexi for fun, going deep into self-bimbofication. Upon waking up the next day, however, she realized that despite her mind returning to normal, she was still Lexi. Seraphina and Rio determined that due to her frequent bimbofication sessions, her body went through a phase of magical adaptation and didn't turn back, leaving her stuck as Lexi permanently, having to deal with her jingling permapiercings in her day-to-day life. She occasionally wears a collar as Lexi.

Alex tends to be quiet around others, despite not quite being shy. She keeps herself very closed off from people she doesn't consider friends, and doesn't bring up adult situations by herself much, but her mind quickly goes into the gutter when prompted.

Alex is mostly straight. While she does engage in activities with other girls and witches, it's mostly for fun and she views it more as teasing instead of intimate, aligning with the witches' opinion of it. This includes being around futanari witches, despite them having cocks. The one exception to this is Brooke; due to being close friends, she thinks she may have a crush on her, and tries (and fails) not to let it show. Brooke is mostly unaware of it until Alex tells her.

Alex is mostly submissive as both herself and Lexi, but doesn't mind spanking others as a show of pseudo dominance.

While Alex is mostly calm and collected, her studying stressed her to the point where she hypnotized herself to be a bimbo just to get some much-needed relief, heavily starting off her bimbofication fetish. She hypnotized herself into thinking that orgasming was like cumming her brains out, giving herself an effective way to self-bimbofy that would last a long time. Before meeting the witches, she only told two people about it, one of them being Brooke, who she eventually showed in person despite her initial embarrassment. Brooke also gave her the idea to give Alex a hypnotic fixation on oral sex, and to orgasm whenever someone she was giving oral to did (which Brooke almost immediately tested).

To make life a bit easier, Lexi briefly considered applying a bimbo lifestyle curse to herself. However, she realized that the inconveniences of always being a bimbo would sometimes get in the way, despite the advantages it may bring for her current form.

Lexi occasionally streams on Flyck to show off her body, and accepts donations for her to either do lewd things or to bimbofy herself even more.

Move details from appearance and personality into a "biography" section.