From Witchypedia
(Redirected from Brooke)
Jump to navigation Jump to search

Brooke Meadows is a female human. Due to having traces of witch bloodlines within her, she has slight magic potential, as well as being more lewd than the average human. With the help of Rio and Lauren, she turned her body into that of a fuckdoll as soon as she figured out a way to remove most of the negative side effects of the latex fuckdoll curse.

Brooke occasionally streams with her mom on Flyck, under the screenname VoidPink.

Brooke is a woman of average height, possessing crimson hair which she usually wears in a ponytail with a red hair-tie. Due to her trying to stay fit, her body is relatively slender. Her breasts are of slightly above average size, becoming highly variable after transforming into a fuckdoll depending on her mood. She has emerald green eyes and slightly tan skin. 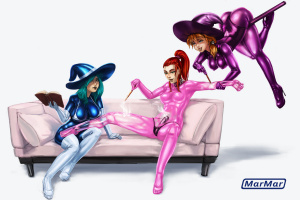 Brooke (center), in the middle of her fuckdoll conversion with Rio and Lauren.

Brooke's regular clothing pre-transformation consisted of short shorts and a halter top. While she still occasionally wears those, she tries to cover up her skin when going out in public, wearing long jeans and a hoodie (usually one of Cassie's or Kate's).

Brooke's transparency runes are visible to those with magic sight.

She's only an airhead literally, not metaphorically. ...but her new body tends to disagree with her on that.
—Rio, on Brooke's personality

Brooke is a forward and assertive girl. She's extroverted, easily making conversation with others and trying to connect with them. She has very little inherent shame when talking about things, which gets Rio interested in her due to humans' relatively conservative nature. Brooke frequently teases her friends, trying to bait a reaction out of them by doing something lascivious while looking at them. She constantly seeks to find "the perfect fetish" for herself, a higher cause for obsession and lust. As a result of this, she experiments with the witches and their magic, hoping to eventually find the perfect fetish.

Despite teasing her friends, she cares a lot about them, and is willing to go to great lengths to help them. Due to being used to interacting with others, Brooke can read people relatively easily, allowing her to guess what someone is thinking about with just a few words. She uses that multiple times to her advantage, most notably when she guesses that Rio is a princess.

Brooke doesn't care about dominant or submissive roles too much; she goes with the flow. However, her body's urges and the company she keeps tend to lead her to a submissive role.

Brooke's sexdoll body tends to tempt her, which leads to her doing some things just to satisfy it.

Brooke is Rio's and Lauren's de facto sexdoll, as a form of repayment for helping her with casting the spell to turn her body into that form. She is friends with Seraphina, even though she doesn't quite trust her intentions.

Brooke and her mom, Lynn, are close, despite their odd relationship. While Lynn is fully supportive of Brooke's activities and hobbies, she may go a bit overboard. This frequently results in Brooke being embarrassed by her mom trying to fit in and act cool.