Cassie, also called Cass or Cassandra, is a human with traces of witch bloodlines. Cassie used to be a normal girl until she got exposed to a certain type of magic by one of Seraphina's spells. Because of this, she turned into a weredoll, someone that turned into a sexdoll under certain conditions. Due to a misunderstanding, Sera made this weredoll transformation permanent, turning herself into a fuckdoll similar to Brooke. Afterwards, her body was enchanted to become a mana battery, storing and redistributing mana as the witches need it.

Cassie appears to be a woman of above average height, with short gradiented blue hair and blue eyes. Her body is black latex with blue detailing, such as a blue gradient (or stripe) going up along the outside of her legs, and the blue streaks in her hair. Despite being a rubber sexdoll, her body has a slight muscular tone. As a part of her transformation, most of her body fat got transferred into her breasts and ass, leaving them both relatively big.

Cassie usually wears either high heels or ballet boots. This is due to her nature, since her doll body enjoys it, despite Cassie herself not liking it much. The boots are usually worn due to Rio and Brooke's teasing, making her rarely given the chance to wear flat shoes. For clothing, she wears a dark blue thong and micro sling bikini. If she wears clothes that cover her up more, she tends to wear a skintight rubber dress that stops right below her crotch, leaving it almost visible if she stands still (and definitely visible if she moves).

She also has golden rings embedded in each of her nipples. They appear as the final part of her transformation. They are a part of her and cannot be removed.

Cassie wears a collar with a mana gem in it as a fashion statement. She occasionally wears a necklace around her neck with "USE ME" written on it, given to her by Brooke. She is unable to take the necklace off by herself due to her doll nature.

Cassie's body, due to its rubber nature, is flexible and stretchable. If stretched enough, it is easy to see that her body is partially transparent, allowing anyone to see inside her. This isn't as obvious from a quick glance, though.

Cassie is relatively quiet and shy around others, contrasting greatly with the people she's around. While fine with the idea of kinky stuff, she is relatively conservative about it (although only due to being compared to, say, Rio). She tends to be around people confident with themselves, who know what they want to do with their lives. She tends to be drawn to kinky people, as well. While she is more interested in the general idea of kinks in fantasy, she is willing to actually try a lot more things after meeting Brooke.

Due to the transformation, Cassie has an extremely lewd body which she isn't comfortable with. She is frequently teased by others by being made to do things such as sunbathing in a bikini, riding a sybian, or doing exercises that causes her breasts to bounce around. Despite that, she doesn't mind showing off her body for others. While Cassie is still relatively shy, she is slowly getting used to her new body, using her situation to her advantage. She uses her status as a mana battery, as well as her body's lust, to entice the witches to service her and her body in order to use her to recharge their mana. 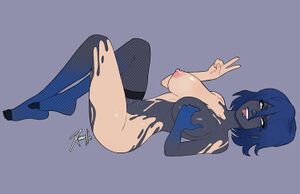 Cassie in the middle of her weredoll transformation.