Lynn Meadows, also known as Lilacdoll on Flyck, is a professional proofreader and editor. She is Brooke's mom. Due to having traces of witch bloodlines within her, she has slight magic potential, as well as being more lewd than the average human. Despite not being able to use magic properly, she shows great interest in it for lewd purposes.

Lynn eventually becomes one of Flyck's most popular streamers. 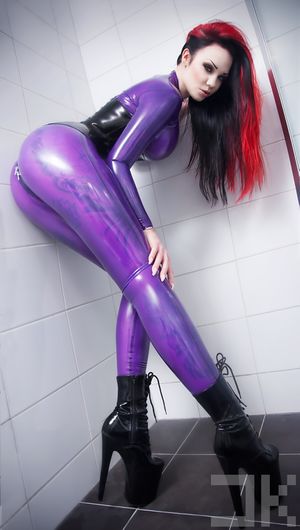 Lynn is a woman of average height and weight. She has vibrant red hair that she keeps short, usually in a pixie cut or something similar. She has a very noticeable shade of green eyes. She exercises regularly to keep fit, which shows despite her years in an office-style job. With Seraphina's help and use of sorcery, Lynn's body reverts to a younger look, almost looking like Brooke's older sister instead of her mother.

After she becomes a streamer, she usually wears some sort of purple latex, usually with a hood and collar to keep her "anonymous". Her standard streaming outfit is a full-body purple latex catsuit with black detailing. This catsuit has magicgates built into a lot of areas, including at her collar, mouth, shoulders, elbows, thighs, knees, and her ass and pussy. While she keeps her body exposed, she uses the magicgate to have a purple heart over her pussy if necessary. She also keeps a magicgate collar around her neck with a dog tag attached to it, which usually contains a pet name or something else similarly degrading (as an incentive for stream donations).

Lynn usually has some sort of gem buttplug inside her, usually as a way to transfer mana over to Rio or Seraphina, since she has little need for it.

Lynn is a caring and loving woman, going out of her way to help others with their problems. At work, she is usually serious and focused on what she is doing. However, outside of work, she is playful and teasing, trying to get others to blush at her actions.

At first, she wants everyone around her to be happy, even if it may be at the expense of her own time or happiness. However, as she leaves her original job and discovers the existence of magic, that slowly changes, and she learns to take time off for herself.

Lynn has a large submissive streak within her, which she slowly discovers after spending time with Seraphina and her magic. She loves to be ordered around, and obeys almost anything when aroused. She also enjoys being hypnotized, as she feels that hypnosis will enable her to be more obedient and indulge more in her kinks. She also enjoys bondage, frequently using her magicgate bodysuit for such purposes.

Lynn is highly organized and detail-oriented, which is mostly seen when streaming on Flyck.

Lynn has no real proficiency with magic, but one thing that she was taught by Seraphina was the manipulation of magicgates. She is able to connect and disconnect two gates together with a little effort, allowing her to use them for various purposes. While she does use them for more benign purposes, such as getting food from the fridge while watching TV, most of her magicgate use is for kinky things with her magicgate bodysuit. A common and favourite use of hers is to link the gate in her pussy and a portable gate in her hand, and slide the latter gate down a huge dildo, locking it in place at the base.

Not in the wiki quite yet, but the idea with Lynn was to give an overly-supportive mom for Brooke that wants to spoil her, and loves her no matter what. Brooke gets an interest in cooking? She buys lots of pots, pans, chef knives, and the like. Brooke gets an interest in writing fantasy fiction? She reads it over, proofreads it, adds suggestions. Finds out Brooke has a thing for latex and rubber clothing? Buys it herself and starts wearing it around the house to show her she's not only okay with it, but she's willing to join in. Lynn finds out Brooke turned herself into a sexdoll? She happily buys lots of sex toys and kinky stuff, asks if she wants to find some boys to fuck her, et c.

Not sure how to represent the magicgates on Lynn's body. Silver outline, maybe?

Undecided on the final personality of Lynn. Given her supportiveness of Brooke. Likely that she wants to help Brooke in any way that she can, so either

Unsure about colour scheme but that can be said about almost any character. Purple tends to symbolize royalty, so I may give the purple colour scheme to Laguna instead.

Lynn seems a bit complex design-wise, especially since Brooke is so plain. May have to improve Brooke's design.