Shining Order of the Feather Duster 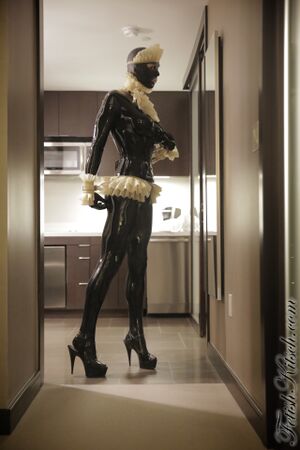 A rubbermaid in full frilly uniform.

The Shining Order of the Feather Duster (SOFTER), also known as the Shiny Latex Maid Collective, the Maid Order, or simply the Rubbermaids, is a group of people based in Goldlight. It consists of few members, and is a mostly-casual group of acquaintances. Members of SOFTER refer to themselves as rubbermaids, and are commonly and affectionately referred to as maidsluts by others. Members of SOFTER are generally recognized by wearing a latex bodysuit that covers their entire body, being dressed in a maid outfit, with the SOFTER logo visible on their body.

While the Order has relatively few members, they are well-known and recognized, especially among the magic-using groups around Goldlight. 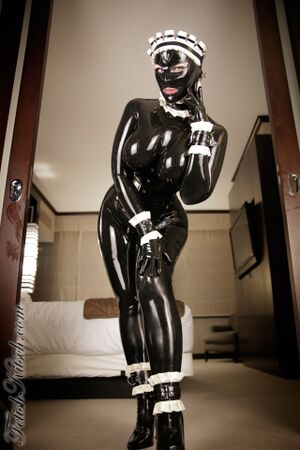 A rubbermaid wearing a headband and frilly accessories.

The history of SOFTER has shaped them into being a strong part of Aurean culture and commonality.

The Shining Order of the Feather Duster was started by Abigail, partially as an inside joke, partially to fulfill a desire of hers to help others while in a latex maid outfit. She dressed up to clean her house, and Para, a friend of hers, unexpectedly came over to visit. Although she was extremely embarrassed, when asked what she was doing, she joked that she was part of the Order and was fulfilling her duties. The next time Para came over, she jokingly asked Abigail why she wasn't dressed in the maid outfit. She put it back on, still very embarrassed, surprising Para a bit. The next time she came over, she brought her own latex maid outfit and said that her house needed to be cleaned, encouraging Abigail to indulge in the maid kink. The two proceeded to clean Para's house while joking around. After that, Para regularly came over while dressed as a latex maid and encouraged them to remain dressed like that.

As the two regularly began to go out to do chores dressed as maids, they were eventually noticed by Amber, who wanted to join them as a sexy obedient maid. Abigail suggested that she should be a maid's maid and that she needed training, and Amber excitedly agreed, to Abigail's and Para's surprise. They came up with a training regiment and a hypno-reinforcement program, as well as an archetype of the Maid Guidelines, and trained them into Amber.

Abigail and Para enjoyed having a latex maid service them while they themselves were dressed as maids. Para expressed interest in undergoing the same training as Amber, so she was trained and hypnotized by Amber herself. As all three expressed a desire to serve others, Abigail decided to rent an establishment in Raymere to serve as maids.

The official founding of the Shining Order of the Feather Duster was when its establishment was opened in Raymere. When opened, Abigail took the role of head maid, to Para's and Amber's delight. As a gift, they hypnotized her with a few ideas that Abigail had but didn't include in the original Maid Guidelines, such as the inability to take off her maid outfit and having cleaning be the ultimate form of pleasure. While embarrassed at first, this gave Abigail more ideas for the Maid Guidelines, outlining more of them and creating its first official iteration.

Once founded, the maids were hired by neighbours customers to clean houses, shine bodysuits, and have their bodies be used. As their popularity grew and they became more involved in the community, more people wanted to join them and help them, including a few witches. Amber took on the role of maid trainer, and Para worked on things such as marketing, with them encouraging the worship of Abigail as the central figure of the Order.

The main hook of hiring a maid from the Shining Order is your neighbours seeing their latex outfits and know they come to, from, and in your house.
—Amber

The Maid Guidelines are a set of guidelines thought of by Abigail. They detail the main guidelines and mantras of SOFTER. The core guidelines of SOFTER are followed by each of its members, and are relatively few in number, such as being completely covered in latex or having latex skin from the neck down, always wearing at least one maid-related thing even when off-duty, training regiments and self-hypnotic reinforcement, and stating that cleaning is the ultimate pleasure. However, a large amount of the guidelines are optional and meant to be suggestions for SOFTER members, due to Abigail's kinks running wild when writing them. These include things such as complete latex encasement, obedience and devotion to SOFTER, and sexual activity with others.

The guidelines are separated into several sections, which state guidelines to oneself, to other maids, to non-maids, and to the community at large.